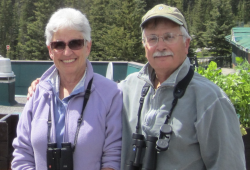 In May 1974, John Tautin's dream job of working as a wildlife biologist for the U.S. Fish and Wildlife Service in migratory bird conservation came true. Three months later, he found himself on a field assignment banding ducks in Alberta, Canada, southeast of Calgary. He was a rookie, but quickly learned the key to successful duck banding was finding good trapping sites, and he found one just south of Frank Lake on private land. As he recalls, the site was a beautiful marsh, full of water, aquatic vegetation and lots of birds. The farmer who, with some reservation, gave Tautin permission to trap ducks saw it differently, though. To him, the marsh was flooded pasture that no longer supported cattle, and, worse, it harbored ducks that ate farmers' swathed wheat ripening in the fields.

That marsh south of Frank Lake proved to be a particularly good place for banding northern pintails in 1974, and when he returned to Alberta to band in August 1975, it was the first site he went to check for ducks. As he approached, looking from a distance across prairie and fields, he could see that something was different. Heavy equipment, including a dragline excavator, was working the site. With his banding partner, they drove out to investigate, fearing that the farmer was draining his beautiful marsh. With some trepidation, they asked the work crew what was going on. They were informed, indeed the farmer planned to drain his marsh, but they weren't working for him. They were with Ducks Unlimited, installing a steel weir to save Frank Lake. When John got home from his 1975 banding assignment, he joined Ducks Unlimited and has been a supporter of the French Creek Valley chapter in northwestern Pennsylvania.

Not knowing at the time, but Ducks Unlimited had worked at Frank Lake before in 1952 when, during a period of flooding, they stabilized the lake. More work was needed during the 1980s when drought dried up Frank Lake. This time Ducks Unlimited secured a long-term supply of water for the lake and constructed a series dikes and water control structures to maintain the lake at optimal levels.

Today, the lake and surrounding uplands are known as the Frank Lake Conservation Area and designated as one of Canada's Important Bird Areas. John, along with his wife, Joan Galli, returned to Frank Lake in 2012 and can attest to its enduring value to waterfowl and other birds. He's confident that with other members like him and Joan, Ducks Unlimited will be caring for Frank Lake and countless other places long into the future. Wanting to create their own conservation legacy with Ducks Unlimited, John and Joan have included DU in their estate plans, joining with thousands of others as members of the Feather Society, a special giving group for planned gifts.

From his home along Cussewago Creek in Northwestern Pennsylvania, John remains active in wildlife conservation. He currently serves on the board of directors of the French Creek Valley Conservancy, one of Ducks Unlimited's many partners in conservation.